UnrealEngine-Angelscript is a set of engine modifications and a plugin for UE5 that integrates a full-featured scripting language. It is actively developed by Hazelight, creators of It Takes Two, which was shipped with the majority of its gameplay written in angelscript. The unreal plugin that integrates angelscript is open source, and has received contributions from several studios in Stockholm and globally.

See Scripting Introduction for an introduction to the scripting language.

Come talk to us in our Discord Server if you're interested or have questions!

When making gameplay systems of higher complexity, blueprint visual scripting can easily lead to unmaintainable spaghetti. However, making these systems in C++ imposes long iteration times, and can be daunting for designers or gameplay scripters to use.

With this plugin you can write gameplay in a customized version of Angelscript, a simple but powerful scripting language.

Some key benefits that this plugin helps achieve: 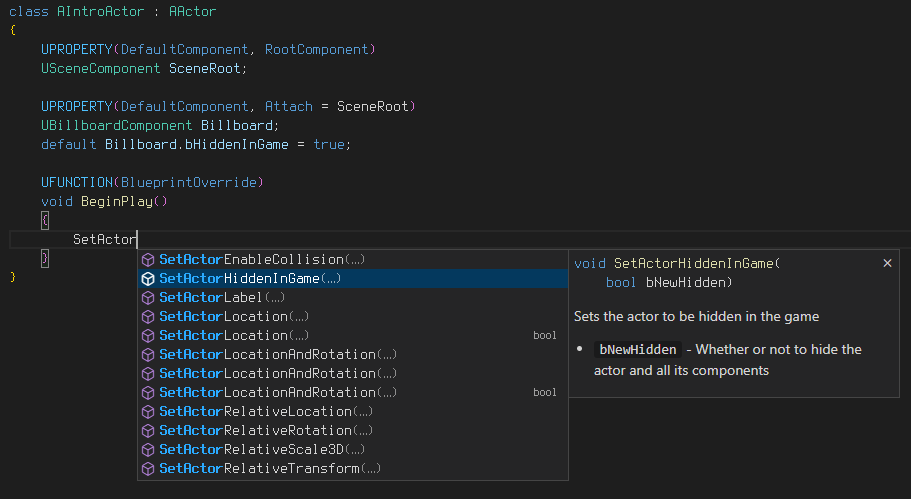 Programmers used to working in Unreal C++ will find the scripts instantly familiar, but with many key simplifications to make life easier for designers and avoid common C++ pitfalls.

See your changes to scripted actors and components reflected immediately when you hit save.

Non-structural changes can be reloaded while playing your game for lightning-fast iteration.

This includes support for many editor features, such as:

Angelscript classes can override any BlueprintImplementableEvent you expose from C++, and can be used seamlessly as base classes for child blueprints.

Use whatever combination of tools fits your workflow best.

Debug your script code through the Visual Studio Code extension. Set breakpoints and inspect variables, and step through your scripts to find issues.